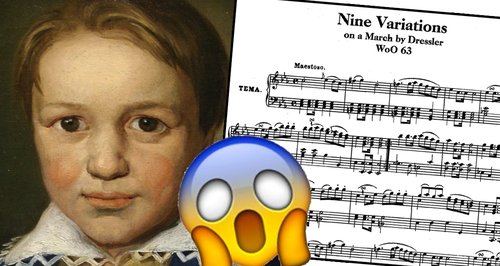 It’s time to listen to Beethoven’s 9 Variations on a March by Ernst Dressler in C minor, his first ever document composition, written when he was only 12 years old.

Not many 12-year-olds can compose anything at all of worth, let alone a dense and layered theme and variations, but Beethoven obviously wasn’t most 12-year-olds…

The young Ludwig Van Beethoven wasn’t as much of an extrovert as Mozart, but his early compositions were every bit as ingenious as his predecessor’s.

This theme and variations, composed in 1783 when Beethoven was just 12 years old, showcase exactly how clever he was, even as a comparative novice.

There are clever harmonies, hints at his later stormy musical character and some delightful melodic phrasing - all the hallmarks of Beethoven’s adult style. Even on this first documented composition, his genius is in full view.

Listen to Beethoven’s 9 Variations on a March by Ernst Dressler in C minor: