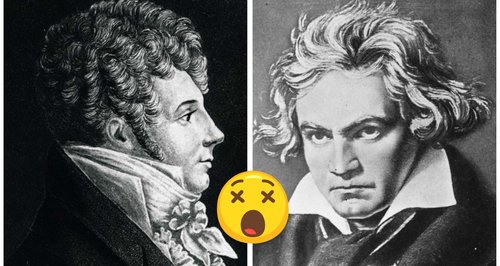 Here's what happens when you challenge one of history's greatest composers and pianists to a musical battle. Spoiler: it didn’t go too well for Mr Steibelt…

A native of Berlin, Daniel Steibelt was one of Europe's most renowned piano virtuosos. He was a typical Prussian - formal, correct, proper. In 1800 he came to Vienna, no doubt with the aim of advancing his musical reputation.

It was quickly agreed among the city's musical patrons that Steibelt should compete against Beethoven in an improvisation contest.

What is an improvisation contest?

These improvisation contests were a popular form of entertainment among Vienna's aristocracy. One nobleman would support one virtuoso pianist, another would support the other. In the salon of one of the noblemen, the two pianists would compete with each other, each setting the other a tune to improvise on.

The playing would go back and forth, increasing in intensity, until a winner was declared. In his early years in Vienna, Beethoven was made to take on the city's best talent and he quickly saw them off.

It was agreed that Prince Lobkowitz would sponsor Steibelt and Prince Lichnowsky sponsor Beethoven, the improvisation contest to take place in Lobkowitz's palace.

The contest between Beethoven and Steibelt

As the challenger, Steibelt was to play first. He walked to the piano, tossing a piece of his own music on the side, and played. Steibelt was renowned for conjuring up a "storm" on the piano, and this he did to great effect, the "thunder" growling in the bass.

He rose to great applause, and all eyes turned to Beethoven, who took a deep breath, slowly exhaled, and reluctantly - to the collective relief of everyone present - trudged to the piano.

When he got there he picked up the piece of music Steibelt had tossed on the side, looked at it, showed it the audience ..... and turned it upside down!

He sat at the piano and played the four notes in the opening bar of Steibelt's music. He began to vary them, embellish them ..... improvise on them.

He played on, imitated a Steibelt "storm", unpicked Steibelt's playing and put it together again, parodied it and mocked it.

Steibelt, realising he was not only being comprehensively outplayed but humiliated, strode out of the room. Prince Lobkowitz hurried after him, returning a few moments later to say Steibelt had said he would never again set foot in Vienna as long as Beethoven lived there.

Beethoven lived in Vienna for the rest of his life, and Steibelt kept his promise - he never returned.

Beethoven was never again asked to take on any piano virtuoso - his position as Vienna's supreme piano virtuoso was established. And those four notes - the first bar of Steibelt's music? They became, in time, the impetus that drives the Eroica Symphony.