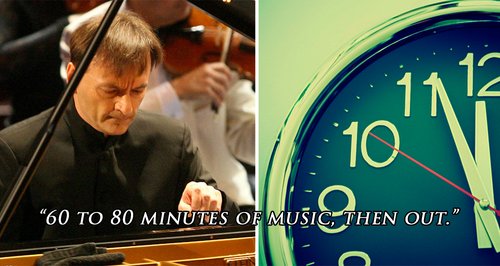 Pianist Stephen Hough has criticised the established format for classical concerts, suggesting that significantly shortening them would make for a more satisfying experience.

He wrote in the Radio Times: ‘At some point in the early 20th Century we settled into a pattern: Concerts should start early evening and last roughly two hours with a liquid interval, either to drink a glass of wine or visit the ladies / gents.’

‘I think we should consider removing the interval and starting either earlier or later than 7:30pm – 60 to 80 minutes of music, then out.’

Hough also described a recent concert experience with the Los Angeles Philharmonic, in which he felt a stronger connection with audience because of its shortened running time and lack of dress code.

62 thoughts everyone has during a classical concert

‘When you play for an appreciative, concentrating audience, there can be a cumulative emotional effect in the hall… an interval’s chit-chat can bring everyone down to earth with a bump and then require the engines to be started up all over again.’

In the article, he also suggests that this shorter running time for concerts could allow orchestras to programme more concerts in the same evening - potentially boosting revenue and repertoire choice.

What do you think? Would shorter concerts make you more or less likely to attend? Let us know in the comments below.

One of the world's greatest pianists came to Classic FM, so we made him play our silly, pink toy piano