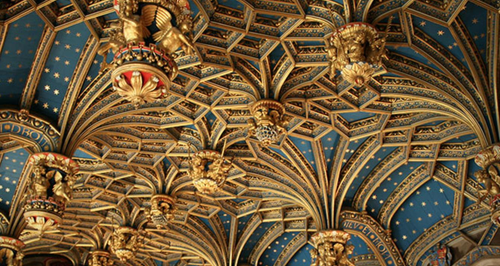 Henry VIII’s chapel to be setting for groundbreaking service featuring The Sixteen and Genesis Sixteen. See below for your chance to enter the ballot for tickets.

History will be made on the evening of Tuesday 9 February when Harry Christophers will lead his ensembles The Sixteen – the Voices of Classic FM – and Genesis Sixteen in the first service according to the Latin Rite of the Catholic Church to be celebrated since the 1550s at Hampton Court Palace’s Chapel Royal.

Paying tribute to the rich and turbulent religious history of the Chapel Royal, the music will include Thomas Tallis’s Magnificat and John Taverner’s ‘Leroy’ Kyrie.

The unprecedented service will bring together leaders of the Catholic Church and the Church of England at such an historically important site.

This Vespers service will be celebrated from 7-8pm by His Eminence Cardinal Vincent Nichols and will include a sermon from The Rt Revd and Rt Hon Dr Richard Chartres, KCVO, Bishop of London and Dean of Her Majesty’s Chapels Royal. Before Vespers, the Cardinal and Dean will take part in a wide-ranging discussion addressing the relationship between the two churches and the monarchy. The conversation will take place in the Great Hall from 5.30-6.30pm.

You can have the chance to attend the discussion and service via a free ballot.

Simply fill out the form below, stating your name, address and telephone number. If you are successful in the ballot, then please bring photo ID with you with the tickets on Tuesday 9 February. Tickets are not transferable.

The event has been organised by the Genesis Foundation and Hampton Court Palace's Choral Foundation.

We're sorry, this ballot is over.

Classic FM, The Sixteen and the Genesis Foundation present a live-streamed concert from Eton College

A top singer's guide to getting through that long, long rehearsal

400-year old work propels The Sixteen to No.1 in the Classic FM Chart