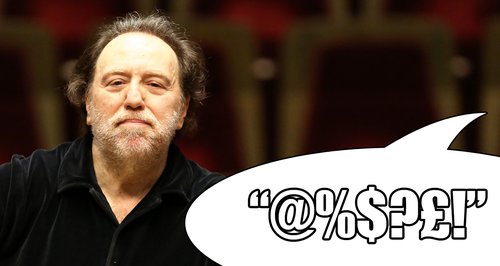 A performance of La Scala’s production of Verdi’s ‘Joan of Arc’ ended in a one-sided slanging match when the director became angry with conductor Riccardo Chailly.

Conductor Riccardo Chailly was the subject of a shouted tirade from opera director Moshe Leiser.

Leiser, who is directing the current run of the opera with his creative partner Patrice Caurier, was recorded berating the conductor backstage after a performance.

There is a pause, after which Leiser then shouts “A**hole!” He then follows it up by muttering “Stronzo di merda”, which translates roughly into English as ‘piece of s**t’.

Listen to the whole recording here

It’s unclear what may have caused the outburst, but according to La Repubblica’s unnamed sources there have been creative tensions between Chailly and the opera’s directors.

La Scala’s Paolo Besana told The Guardian: “It happens a lot of times that conductors and directors have different points of view and this time unfortunately there was a microphone.”

Riccardo Chailly: ‘If a female conductor is gifted they are as powerful and meaningful as those in the so-called male tradition’

Riccardo Chailly on his Brahms Symphonies: 'it was time to rip out the bad habits'