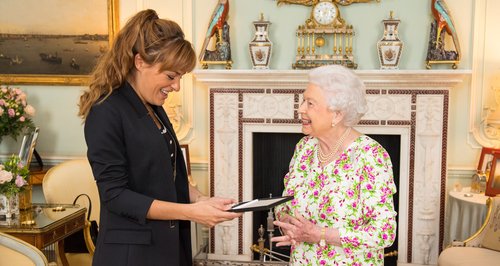 The brilliant violinist has become the youngest ever recipient of the medal, which is awarded each year to a musician, or group of musicians, who have had ‘a major influence on the musical life of the nation’.

Nicola Benedetti becomes the twelfth person to receive the medal – it has previously been awarded to bass-baritone Bryn Terfel, conductor Sir Colin Davis and Classic FM’s Orchestra of Teenagers, the National Youth Orchestra.

The Queen presented the Scottish violinist with the medal on 23 May at Buckingham Palace.

Nicola said: “It is such an honour to receive the Queen’s Medal for Music and to join such an esteemed list of recipients. I believe passionately that the arts and music should not be a luxury, and everyone should have access. I see first-hand the powerful impact increased creativity can have on people's lives, and witness in schools, after concerts and during workshops, the effect of experiences that stir our souls and remind us of feelings we forgot were there.

“I will continue to fight to ensure as many people get access to the arts at a time when music and the arts are being so woefully neglected on the national curriculum agenda.”

The medal was established in 2005 by composer Sir Peter Maxwell Davies, who was Master of The Queen’s Music at the time. It is awarded to a musician, or group of musicians, “who have had a major influence on the musical life of the nation”.

The current Master of the Queen’s Music, composer Judith Weir said: “Exceptional in the range of her musical activities, Nicola Benedetti is inspiring new generations of children to learn to play instruments and to enjoy music actively; and gives a significant part of her time and energy to teaching and advocating the importance of music in society and education.”